Changes in Temperature and Rainfall as a Result of Local Climate Change in Pasadena, California

The City of Pasadena is located in southern California; a region which has a Mediterranean climate and where the vast majority of rainfall occurs between October and April with the period between January and March being the most intense. A significant amount of the local water supply comes from regional rainfall, therefore any changes in precipitation patterns in the area has considerable significance. HYPOTHESIS: Local climate change has been occurring in the Pasadena area over the last 100 years resulting in changes in air temperature and rainfall. AIR TEMPERATURES: Between 1886 and 2016 the air temperature in Pasadena, California has increased significantly, from a minimum of 23.8°C in the daytime and 8.1°C at night between 1911 and 1920 to 27.2°C and 13.3°C between 2011 and 2016. The increase in nighttime temperature was uniform throughout the year, however daytime temperatures showed more seasonal variation. There was little change in the daytime temperatures May through July but more change the rest of the year. For example, the median daytime temperature for June between 1911 and 1920 was 27.9°C but was 28.7°C between 2011 and 2016, a difference of 0.8°C. In contrast, for October for the same periods the median daytime temperatures were 25.6°C and 28.9°C, a difference of 3.3°C. RAINFALL: There has been a change in local rainfall pattern over the same period. In comparing rainfall between 1883 – 1949 and 1950 – 2016, there appeared to be less rainfall in the months of October, December, and April while other months seemed to show no change in rainfall. For example, between the two periods mentioned above, the median rainfall in October was 12.4 mm and 8.9 mm respectively while for December they were 68.6 mm and 40.4 mm. There was comparatively a smaller change in the median volume of rainfall in April (18.8 mm vs. 17.5 mm). However, between 1883 and 2016 there were 13 with less than 1 mm of rain, 12 of which occurred after 1961. In the same line of logic, no measureable amount of rain occurred for 23 Octobers, 15 of those occurred after 1961. CONCLUSION: As air temperatures increased over the last 100 years in the Pasadena area, rainfall may have decreased in October, December, and April. 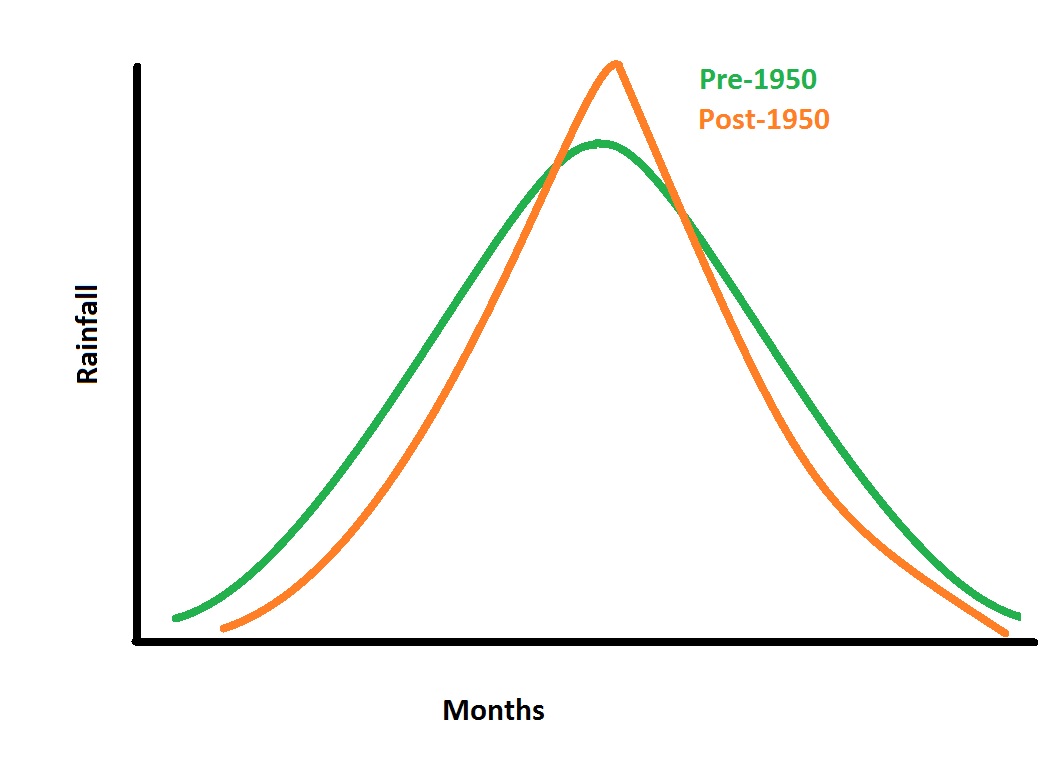