Either stereo reactants or stereo catalysis from achiral or chiral molecules are prerequisite to obtain pure enantiomeric lipid derivatives. We reviewed a few plausible organic syntheses of phospholipids under prebiotic conditions with a special attention to the starting materials as pro-chiral dihydroxyacetone and dihydroxyacetone phosphate (DHAP), which are the key molecules to break symmetry in phospholipids. The advantages of homochiral membranes compared to those of heterochiral membranes were analysed in term of specific recognition, optimal functions of enzymes, membrane fluidity and topological packing. All biological membranes contain enantiomeric lipids in modern bacteria, eukarya and archaea. The contemporary archaea, comprising of methanogens, halobacteria and thermoacidophiles are living under extreme conditions reminiscent of primitive environment and may indicate the origin of one ancient evolution path of lipid biosynthesis. The analysis of lipid metabolism reveals that all modern cells including archaea synthetize enantiomeric lipid precursors from prochiral DHAP. sn-glycerol-1-phosphate dehydrogenase (G1PDH), usually found in archaea, catalyses the formation of sn-glycerol-1-phosphate (G1P), while sn-glycerol-3-phosphate dehydrogenase (G3PDH) catalyses the formation of sn-glycerol-3-phosphate (G3P) in bacteria and eukarya. The selective enzymatic activity seems to be the main strategy that evolution retained to obtain enantiomeric pure lipids. The occurrence of two genes encoding for G1PDH and G3PDH, served to build up an evolution tree and the basis of our review focusing on the evolution of these two genes. Gene encoding for G3PDH in Eukarya may originate from G3PDH gene found in rare archaea indicating that archaea appeared earlier in the evolution tree than eukarya. Archaea and bacteria evolved probably separately, due to their distinct respective genes coding for G1PDH and G3PDH. The suggested hypothesis is that catalysis of homochiral G1P or G3P from DHAP are more efficient than those leading to racemic G1P and G3P, since there are no enzymes able to synthesize racemic G1P and G3P from DHAP. We propose that G1PDH or G3DPH, which are not “image mirror enzymes” but belonging to distinct family of proteins, emerged separately during evolution. They were probably selected for their efficient catalytic activities during evolution from large libraries of vesicles containing various biopolymers, including amino acids, carbohydrates, nucleic acids, lipids, and meteorite components to induce chemical imbalance. 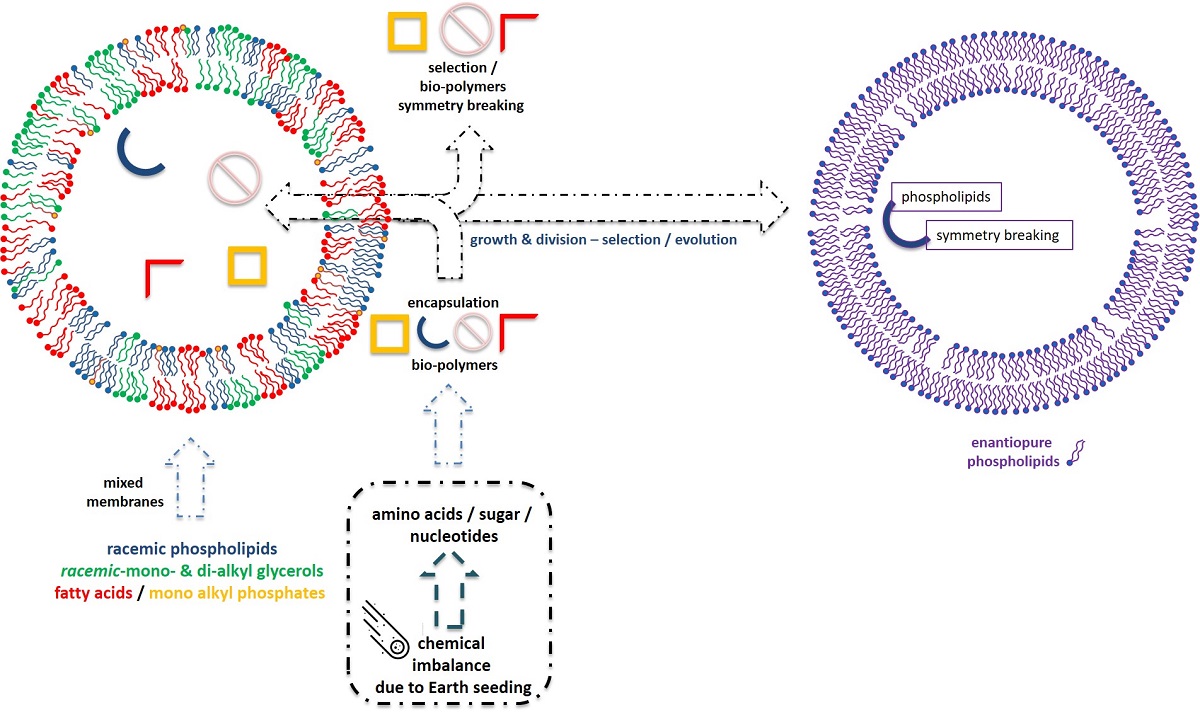 ×
Views 0
Downloads 0
Comments 0
Metrics 0
Get PDF Cite Share 1
Bookmark BibSonomy Mendeley Reddit Delicious Publons
×
Alerts
Notify me about updates to this article or when a peer-reviewed version is published.
We use cookies on our website to ensure you get the best experience.
Read more about our cookies here.