The human microbiome is extremely complex considering the amount of species, their interactions, and its variability over time as a function of environmental drivers. Here we untangle the complexity of the human microbiome for the Irritable Bowel Syndrome (IBS) that is the most prevalent functional gastrointestinal disorder linked to many causes. Based on a novel information theoretic network inference model (that considers conditional entropy reduction till the maximum entropy is not reduced further) we detect species interaction networks that are functionally and structurally different for healthy and unhealthy individuals. Healthy networks are characterized by a neutral symmetrical pattern of species interaction and small-world features for functional node degree and distance versus random unhealthy networks. We detect an inverse scaling relationship between species total outgoing information flow (''active flow'') and abundance. The top 10 interacting species are also the least abundant for the healthy microbiome and the most detrimental; however these species are controlled by other species (via negative feedbacks) and the microbiome is self-organized into a healthy state. On the contrary, the most abundant species for the unhealthy microbiome are the least interactive and the most detrimental. These findings support the idea about a diminishing role of network hubs and hubs should be defined considering total outgoing information flow. The healthy microbiome is characterized by high diversity growth rate, small species similarity decay over time (i.e. low species turnover), and small variability in the abundance of all species. This result challenges current views that posit an association between health states and the highest diversity in ecosystems rather than the highest biodiversity growth as in this study. In a network perspective the healthy microbiome is configured as a small-world network with a tendency toward a critical scale-free network while the unhealthy one is organized as a random network with many more interacting species. We show how the transitory microbiome at the edge of the healthy and unhealthy ones is unstable and criticality of the healthy microbiome is not at the phase transition (or second order) between order and chaos but in a meta-stable state (on the contrary of other critical systems where energy and entropy grow in the same direction and criticality is at the transition). We stress out the importance of considering interacting pairs versus single node dynamics when characterizing the microbiome nexus and of ranking these pairs in terms of their dynamics; interactions (i.e. species collective behavior) shape transition from healthy to unhealthy states. The macroecological characterization of the microbiome is useful for diagnostic purposes and disease etiognosis while species-specific analyses can detect species that are more beneficial to humans leading to personalized design of pre- and pro-biotic treatments and engineered microbiome transplants as two examples. 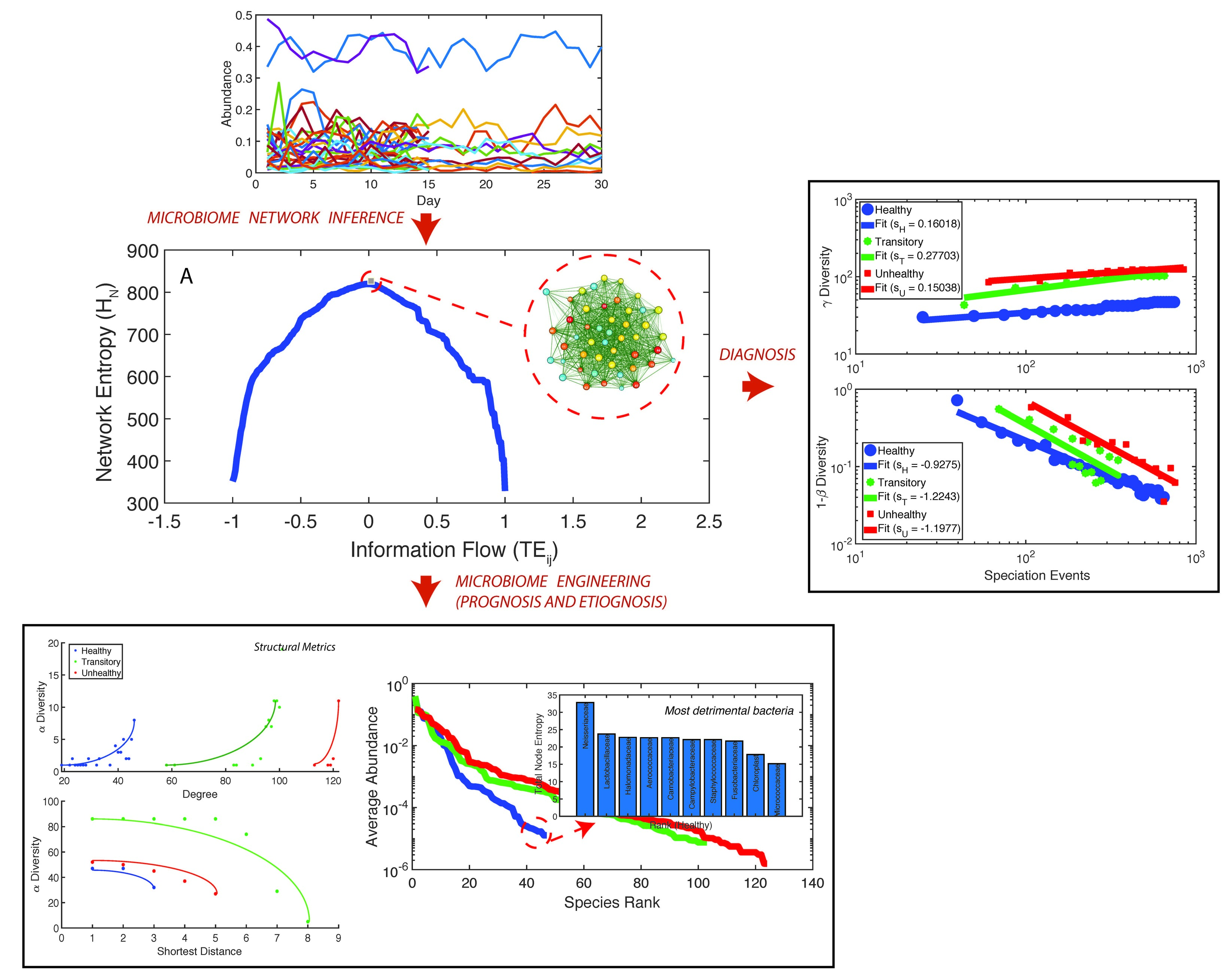